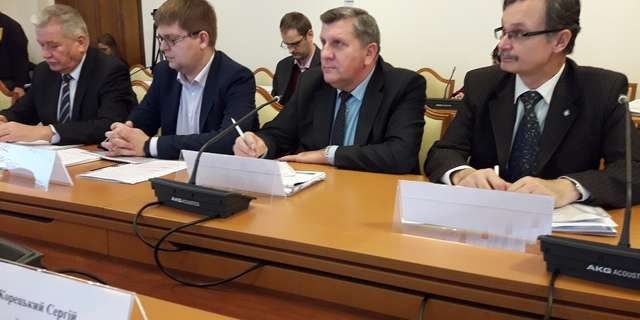 On November 14, 2017, a “round table” on “Concrete roads: Reality for Ukraine” was held in the session hall of the Committees of the Verkhovna Rada of Ukraine under the chairmanship of First Deputy Chairman of the Transport Committee I.V. Vasyunyk.

The meeting was attended by people’s deputies – members of the Committee on Transport, representatives of the Ministry of Infrastructure, Ukravtodor, Association Ukrcement, State Automobile Roads of Ukraine, design organizations and construction companies, specialists of the leading scientific institutions of the region.

Igor Vasyunyk, opening the round table, noted: “Road construction in Ukraine is one of the priorities in the activity of the Ukrainian government.” He believes that “it is necessary to move on to such a European practice or model where the cost of roads is determined by a more generalized indicator – cycle of life of the road, which should not be 5 to 10 years, as it is now, but should be 20 to 25 years, as it is now in the European Union. “According to him, one of the ways to solve this problem is the construction of concrete roads, at least for the beginning – on those with increased traffic and the movement of large vehicles.

During the meeting a number of speeches took place, in which various aspects of the prospects for the construction of cement concrete roads in Ukraine were considered. An active discussion took place, during which the participants expressed their arguments on the problem that was being considered and cited their calculations taking into account the world experience.

Pavel Kachur, Chairman of the Association “Ukrcement”, as a weighty argument for the construction of concrete roads spoke of their “patriotism”, since all the main materials for them can be found in Ukraine. He cited data on the state spending funds on the purchase of bitumen for asphalt roads.

Petr Koval, independent expert, scientific consultant of Technobasalt-Invest, took part in the discussion. He noted that for the implementation of plans for the construction of concrete roads need a thorough legislative, regulatory and technological support. And to increase the life cycle of a concrete road allows the use of basalt fiber for micro-reinforcement of concrete and basalt plastic reinforcement, which has a number of advantages over the metal, for the construction of continuously reinforced concrete roads.

The participants of the round table addressed recommendations to the central government bodies and local self-government bodies, where ways of realizing the prospects of cement-concrete roads construction in Ukraine were given.

← Previous Next →
To news blog